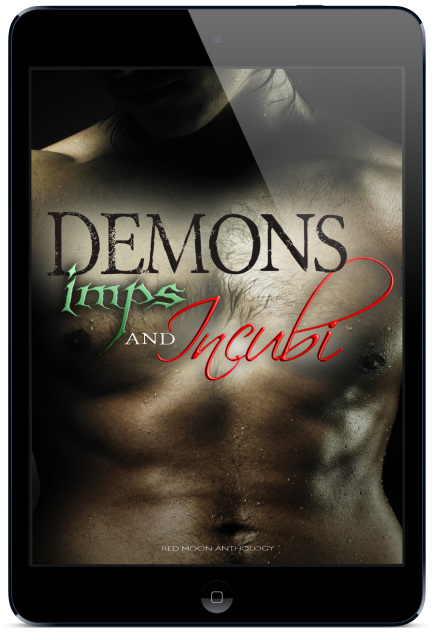 Demons, Imps, Incubi: dark, powerful, and forbidden. Only the foolish would seek one out for seduction, and yet . . . deals are struck. Souls are ensnared.

But must a demon's agenda always be demonic? Can he be redeemed? Or does being bad feel too good to bother with redemption? Long ago, imps were more mischievous and playful--naughty, perhaps?—and perceptions of them have only grown more sinister over the centuries. The incubus craves sex, but what makes us crave him?

Circles Within Circles by Cori Vidae

Mary never believed the rumors about her mother being a witch, but when a mirror inexplicably connects her to her twin brother Michael, stationed half a world away on a WWI battlefield, she reconsiders. To protect him from a battle he has reason to believe will be his last, Mary sets out to uncover any magic left on her isolated farm.

Cairn wakes from centuries of banishment to a cramped basement and a sensual, albeit surprised, woman. Perhaps she didn’t intend to summon him, but since she did, perhaps he could help… for a price.

Measures of Greed by Alexa Piper

Valerian wants a distraction, but the witchling he meets at a crossroads turns out to be far more than that. Toying with her might be his undoing, but he can’t help himself.

Cora wants to unravel a mystery, and Valerian’s sensual enticements keep getting in her way. He draws her into a world of strange darkness and even stranger light. Trickery twists her fate, but not even Valerian can hope to twist her will.

There’s nothing like a party in the Underworld… especially when you’re a goddess in a really bad mood.

Angry with her daughter’s annual trip to the Underworld, Demeter decides to crash Hades’ party at the Elysian Club, but she’s not as immune to the hot, writhing bodies as she’d thought. Or maybe it’s just one body that can entice her.

Nick is an incubus on Hades’ payroll. When he catches sight of a sexy goddess in the throng of night club goers, he knows this won’t be a night he’ll soon forget as two forces collide in a scorching interlude of fiendish passion.

When Celeste summons Santorava, the Demon Lord of Kraal, his heartbreaking story ignites a fire in her. She’ll risk everything to discover the secret of his world and, in turn, a secret she carries in her soul.

Dromtsiirin at the Tiki Lounge by Nicole Blackwood

At last, Benjiishnael’s long years of exile are at an end. All he has to do is keep his human ward safe until his master’s fiendish deal is done, and Benji can return home to Dromtsuul. But the deal unravels, and worst of all, Benji is becoming inexplicably… aware… of his ward.

Some nights can’t be forgotten. Some can’t be remembered—which may be for the best, unless there’s a strange woman in your bed. And she’s not breathing.

Setting off to retrace his steps and his whirlwind romance, he’s about to discover there’s more to romance than life and death.

By Divine Dictate, incubi and succubi are forbidden from falling in love. Irdo knows his yearning for Lilin is doomed, but he can’t help wishing for what is out of reach.

Lilin fears life will only get more difficult for demons as the modern world leaves them behind. More than that, she fears losing Irdo forever. It’s bound to happen. Their affair won’t escape notice much longer, and paying the price might destroy them both…

Iron and Embers by M. Arbroath

Ember’s new client makes an offer she can’t refuse: enough gold to finally leave her stepmother’s household in the oppressive goblin-ruled lands. All she has to do is sneak into Duke Vertigren’s manor and swap a mystical artifact for a magic-leeching, iron fake without drawing the handsome Duke’s ire… or other attentions.

Laura Harvey is an editor, writer, bibliophile, horsewoman, historian, teacher, debate coach, nerd, DIY junkie, and occasional rescuer of kittens. She holds a BA, MA, and is ABD, making her an exceptional asset in Trivial Pursuit. She loves reading so much that all of her handbags share one crucial ability: fitting a standard paperback or Kindle. She lives in northern California with a menagerie of beasts (dogs, cats, horses, and family members).
World Weaver Press | Books | About | Contact | Blog | Submissions | Press