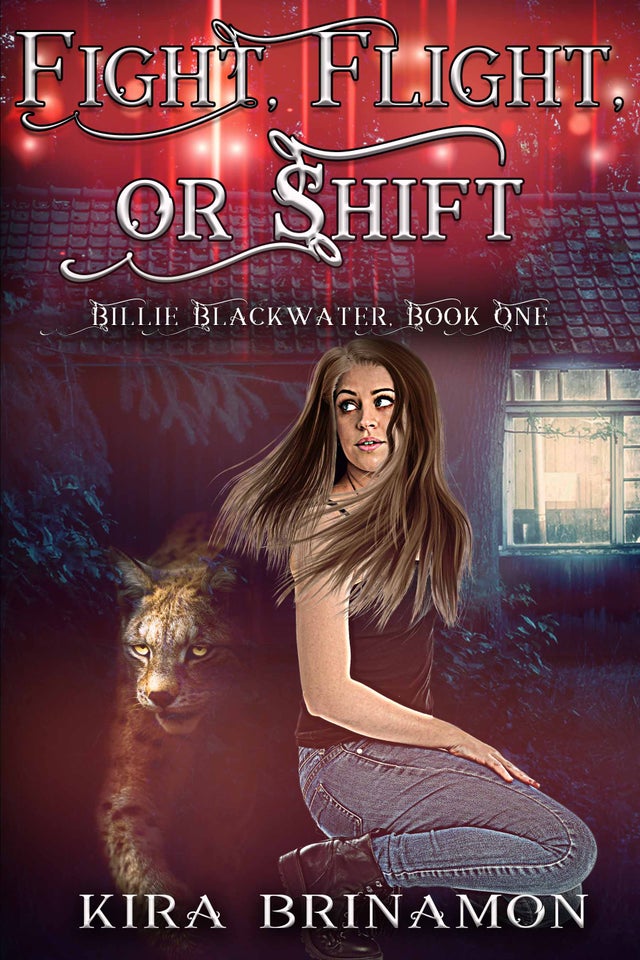 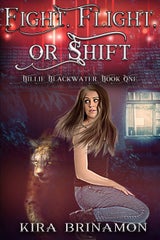 Also available as an ebook

Billie Blackwater is the only shapeshifter in the mountain town of Juniper, Colorado—at least since her father accidentally shot her mother, thinking he was protecting the family from a mountain lion. Now, Billie works at the historic Silver Coin Hotel, and when she’s not serving drinks, checking in tourists, or leading bogus ghost tours, the hotel proprietor, Mitch, exploits her shapeshifting abilities to spy on the patrons of his illegal casino.
​
When she discovers that a local drug dealer is peddling a dangerous new synthetic drug called Scarlet, Mitch wants him taken care of and tries to convince Billie to do the deed. She refuses—but he winds up dead anyway, along with two of Mitch's henchmen. With all three deaths looking like the result of wild animal attacks and a vindictive boss ready to out her secret, the blame is going to rest on her shoulders if she can’t figure out who or what did the killing.

Billie stopped at the first landing and pointed toward a large arch-top window that overlooked the lake, telling the group how on certain nights, if the moonlight was just right, you might see a woman in white looking back at you through the glass. Everyone nodded somberly, snapped pictures of the window, and followed Billie up the flight of stairs to the next attraction. In front of a hotel room door labeled with the ominous number of 13, she told them about a guest whose belongings were unpacked and strewn about the room every time he left. At a storage closet, she described the maintenance man who had supposedly been found dead in there. Near the blocked off staircase to the upper floor, where the casino was, she told the story of Reno Bridges.

“In the year—” She couldn’t remember the year it was supposed to be, so she picked one at random. “—nineteen-fourteen, Juniper was a booming mining town. The Silver Coin’s top floor was a dancehall, where all the miners and their ladies came to dance and drink. It was owned by Reno Bridges back then, and he was a busy man, always worried about his business, always taking care of the patrons who frequented his establishment. Well, his wife got tired of being ignored, and of watching everyone else have fun while she had no one to dance with. So she started up an affair with one of the newest prospectors in town, dancing with him every night. And when Reno Bridges finally noticed what was going on and confronted his wife’s lover, the man pulled a knife and stabbed him, right in the middle of the dance floor. He bled out there, with everyone watching. His wife took over the Silver Coin after that, with her new husband, but attendance at the dancehall began to drop because the miners shared strange stories. They said they still saw Reno Bridges. They’d go to get a drink and he’d be there at the bar, covered in blood and dripping all over their whisky glass. They said they’d see a man lurking near their wife, but when they approached, they could see right through his skin to his skeleton. Finally, the dancehall closed, and the stairway was blocked off. Sometimes, even now, we hear things that let us know that Reno Bridges is still up there, plotting his revenge.”

As if on cue, a rattle and thump came from just overhead. The tourists all jumped. Billie tried not to roll her eyes. Some rancher had probably just bet away his favorite bull, again, or someone was going to have to wash someone else’s truck for a year because they bluffed when they should have folded. It was mostly locals who played Mitch’s games, and they traded as much in goods and favors as they did in money, since even the richest residents of Juniper didn’t have a lot to throw around. Mitch strutted around like he owned the town and took his illicit activities very seriously, but to Billie the guys in the casino often seemed like little kids playing dress-up. Of course, she’d never tell Mitch that. And of course, since the tourists didn’t even know the casino existed, what other explanation could there be for the thumps and creaks except a ghost?

She gestured toward the bird cage elevator next to the blocked-off staircase, and suggested the ghost tour group take the elevator back down to the first floor. The doors opened to let them out near the hotel bar where Billie usually worked, where she’d have to go back to as soon as she finished the ghost tour. But the tour was supposed to be an hour long, and she still had twenty minutes to fill. What was that one Kim had made up about the kids who had broken into the Silver Coin while it was abandoned? She started to tell it as she led them down the hallway, making up the details she couldn’t remember.

“Excuse me,” one of the tourists interrupted. Billie turned to see one half of the young couple, standing with a hand on her hip and lips pursed. Billie looked between the couple. They were probably around Billie’s age—mid-twenties, anyway—and the man wore a Denver Broncos shirt, while the woman’s graphic t-shirt featured some band Billie had never heard of. “That’s not the same version we heard last time we were here,” the woman in the band t-shirt said.

Crap, Billie thought. “Well if you had Kim last time, she does tend to embellish…”

The woman shook her head. “No, see, we’re amateur ghost hunters, aren’t we honey?” She looked to the man in the Bronco shirt, who nodded eagerly. “And this story is very well documented by a blogger that we follow. There’s even a picture.”

“Well,” Billie faltered. “There have been lots of pictures of orbs taken in this hallway…”

“Not orbs,” the woman said, exasperated.

Just then, the elevator doors down the hallway clanged open, and Billie looked past the tourists to see Mitch holding onto a man’s shirt like a cat held by the scruff of the neck. It was Daniel Gadbury: a regular on the casino floor, one of those locals who sat up there gambling away their family’s land or their earnings from the quarry. Daniel’s face was beet red, and Mitch looked pissed. Wonder what he did this time, Billie thought as Mitch pushed him so he stumbled out into the hallway, hitting the wall and tumbling onto his side. Probably tried to cheat, or insulted one of Mitch’s fancy out of town friends. The tourists stared aghast as Daniel groped at the wall, struggling to stand. He staggered toward the double doors that would let him out to the parking garage. Mitch made eye contact with Billie, then crooked his fingers in a quick “come here” gesture.

“Sorry, excuse me for just a minute,” she told the tour group. She wondered if she could figure out how to spin this as a re-enactment of some ghost story to keep them from leaving bad reviews.

As soon as Billie was close enough, Mitch growled, “Follow him.”

“Uh…” She gestured toward the tour group. “Kind of in the middle of something here.”